The Chinese handset maker, Lenovo is now all set to up its game further by launching its newest Lenovo K4 Note smartphone with Theatermax feature that supports virtual reality. Lenovo K4 Note, priced competitively at Rs. 11998 is a successor to the much acclaimed K3 Note but it is miles ahead of its elder sibling in terms of specifications, design and hardware. This smartphone has been placed by the brand under INR 15,000 and the only other smartphone that has the chops to take it on is Samsung Galaxy J7, priced at Rs.14999. To make it easier for buyers to decide which smartphone to buy, we break it down point by point for both smartphones. Read ahead and decide for yourself, which smartphone fits your requirement better. You can also dig deep by using mobile compare tool on Priceraja.com to pitch them against each other. In terms of design and aesthetics, Lenovo K4 Note is a massive improvement over its predecessor as the brand has has made several improvements over its last design. This handset comes with a metallic frame with a matte rubberised back panel. The back panel of the handset also houses a square fingerprint scanner and camera module nestled upon a metallic strip. Samsung Galaxy J7, on the other hand, comes with the typical Samsung design with polycarbonate make and metallic finish on the rear panel. However, the overall look of the handset is in line with Samsung’s new design and feels good in the hand.

Samsung has equipped its last year’s launch with a large 5.5 inch display that is ideal for multimedia and gaming. It offers a resolution of 720 x 1280 pixels to is users so that they can enjoy their multimedia content in HD quality. Lenovo K4 Note too comes with same 5.5 inch display that offers similar viewing experience to its users. However, K4 Note trumps Galaxy J7 when it comes to resolution as it offers full HD viz. 1920 x 1080 pixels for high quality multimedia experience. Moreover, the display of K4 Note comes protected by a layer of Corning Gorilla Glass.

Samsung Galaxy J7 comes running on an Octa-core processor that has been clocked at a decent 1.5 GHz for a modest performance. Lenovo K4 Note on the other hand has similar Octa-core processor that has a slightly lesser clock speed of 1.3 GHz. The main difference lies in the make of the processor where K4 Note has been equipped with a Mediatek SoC and Galaxy J7 boasts of a superior Samsung Exynos unit. Lenovo K4 Note is less likely to experience any kind of lag since it has double the RAM at 3GB as compared to Galaxy J7 at 1.5 GB. Both handsets come with the last generation Android 5.1 Lollipop operating system for an enhanced user experience.

Both Lenovo K4 Note and Samsung Galaxy J7 is being offered by their respective manufacturer with Android 5.1 Lollipop operating system pre-installed in them. While the base operating system is identical, the individual user interface offered by brands makes a world of difference. Lenovo K4 Note comes with a revamped Vibe UI running atop the stock operating system. The new Vibe UI has brought back the missing app drawer in earlier versions and allow users to experience a clutter-free interface. Samsung has also made some serious changes to its Touchwiz UI, which was subjected to some serious user bashing in older device. Samsung Touchwiz UI used to be plagued with some serious bloatware and tend to cause lag in general performance. However, the new Touchwiz UI from the brand comes with lesser bloatware and thus is less affected by lag. It is a well known fact that AMOLED display are more battery preserving than a regular IPS panel and as such battery backup is no parameter to judge this smartphones on.

Both Lenovo K4 Note and Samsung Galaxy J7 flaunt a powerful 13 Megapixels primary snapper on the rear panel for day to day photography. On the front panel as well, both smartphones have identical 5 Megapixels snapper for clicking selfies. However, Samsung is a step ahead as it comes with an LED flash accompanying the front camera.

Samsung Galaxy J7 is powered by a decent 3000 mAh battery that can easily last a whole day on moderate usage. On the other hand, Lenovo K4 Note features bigger 3300 mAh battery that can also easily last a day or more if used conservatively. While the battery of K4 Note is definitely more powerful on paper, in the real life scenario both devices perform the same on grounds of battery backup. We say this because Samsung equips its handsets with its own AMOLED panel and Galaxy J7 is no exception.

Another parameter of pitching both these handsets is the availability of the smartphones in physical and online stores. You can find Samsung smartphones on every major brick and mortar retail stores as well as online stores and Samsung Galaxy J7 is not exception. Lenovo K4 Note on the other hand is being sold by the brand through online flash sale model and is exclusive to Amazon only. Therefore, while Lenovo K4 Note obviously trumps over Galaxy J7, most users will be disappointed owing to the flash sale model where the stock runs out within a matter of seconds. 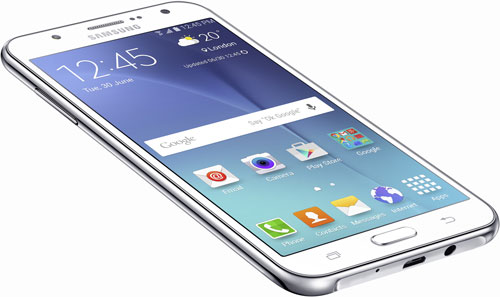 Coming to the conclusion, Lenovo K4 Note is definitely the device of our choice since it features new age technology like Theatermax and a bundled VR headset. This handset also boasts of a sturdier metallic build, fingerprint scanner, double RAM and intuitive Vibe UI. However, those who like to click selfies are bound to be inclined towards Galaxy J7 owing to the presence of front flash. If you tend to find yourself inclining towards Lenovo K4 Note, we would suggest you to register asap on Amazon.in for flash sale and be quick in adding the device to your cart on time.